Korea National Arboretum (KNA) is located in Gwangneung forest, between Namyangju-si and Pocheon-si, in Gyeonggi province. Gwangneung was a royal forest, which surrounding the mausoleum of King Sejo of Joseon dynasty. Thus, over the last 500 years it has been strictly managed in order to minimize human disturbance.

The Gwangneung arboretum, affiliated to the Korea Forest Research Institute, was established in 1987 and has been opened to the public since then. In May 24. 1999, it became the Korea National Arboretum. In KNA, there are various specialized gardens, Forest Museum, Korea National Herbarium and Seed Bank. KNA was designated as a UNESCO biosphere reserve in June 2010.

The missions of Korea National Arboretum are to conserve and to develop plant resources through comprehensive research, and to promote public's understanding on forests.

Methods to carry out our missions are as follow : 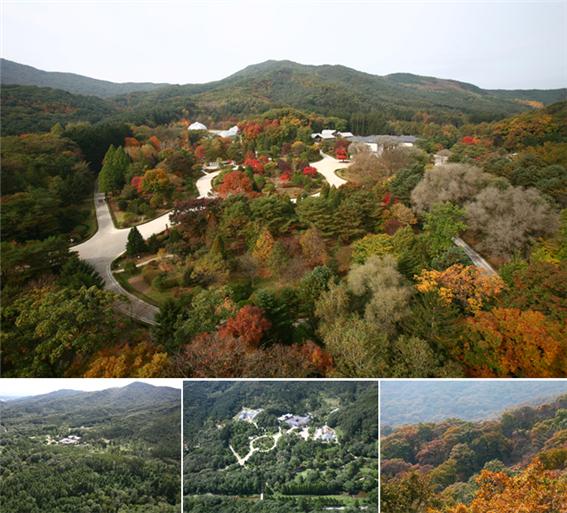 Korea National Herbarium was built in 2003, here there are more than 400 thousand pieces of domestic and foreign plants, insect specimen, wild animal specimen and plant seeds are in preservation and management. In 2008, 2,700 pieces of genealogic tropical plants were planted for the research activities.

In addition, KNA has built national bio species knowledge and information system to provide information service with forest bio samples and plant information data base of related universities, research agencies, arboretums, botanic gardens and KNA. KNA is also running the Korean Plant Names Index with the Korean Society of Plant Taxonomists for harmonization and standardization of the Korea made botanical names.

Thus KNA is succeeding the culture of Korean forest bio species started in 1920’s, especially we are carrying out important role in securing the sovereignty of forest biology. Also, since it was designated as the royal tomb of King Sejo of the Joseon dynasty in 1468, it has been more than 540 years that the Gwangneung forest has been protected and managed by National Research Institute controlled by the Korea Forestry Service.