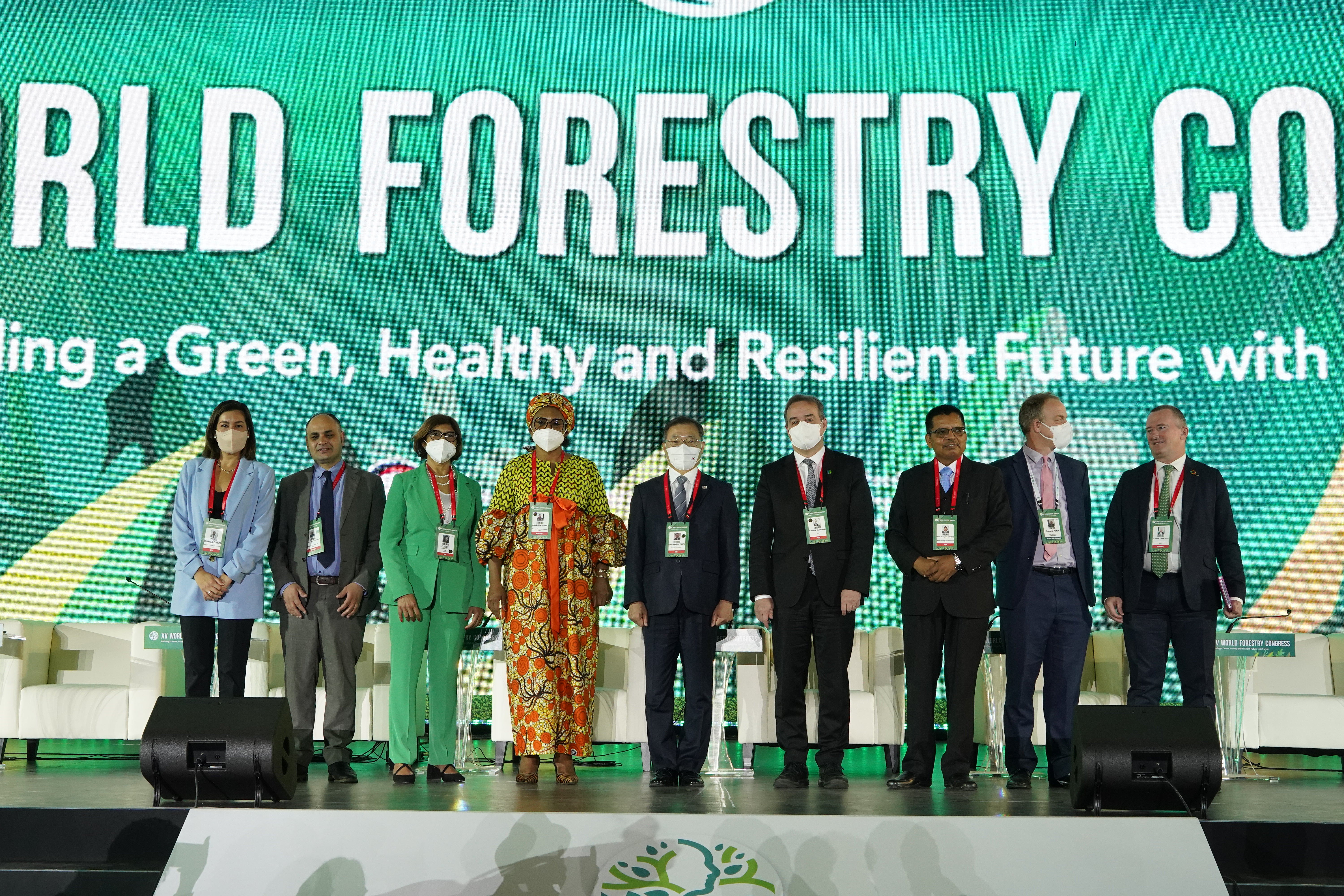 On May 3, the Korea Forest Service held the ‘Ministerial Forum on Forest Finance’ as a special event at the 15th World Forestry Forum held in COEX, in Seoul.

※ The Green Climate Fund (GCF) is an international financial organization focused on responding to climate change and CO₂reduction. It is headquartered in Songdo, Incheon City, Republic of Korea, where it first opened in December 2013.
※ Launched in Seoul in June 2010, the Global Green Growth Institute (GGGI) is an international organization committed to strengthening developing countries green growth strategies.

o The Minister also highlighted the will to expand financial support and increase attention to developed countries’ forests, including ‘The Glasgow Declaration’ and ‘Global Forest Finance Pledge (GFFP)’ announced at COP26, held in the UK last November.

※ The Global Forest Finance Pledge (GFFP) is a pledge for twelve countries, including the UK, the US, Germany, Norway, France, and the Republic of Korea, to provide around 12 billion dollars to ODA for the conservation and restoration of tropical forests from 2021 and 2025.

□ The forum started with opening remarks by Deputy Director-General Maria Helena Semedo of FAO. The DDG said that the world loses 10 million hectares of forest each year and urged attention to forestry as part of national financial policy. The DDG mentioned that Korea has been playing a special role as a hub for innovation and sustainable investment, expressing thanks to it.

□ The Second Vice Minister Ahn Do-geol of Economy and Finance highlighted the importance of nature-based solutions, including forests, in responding to climate change through a congratulatory remark.

o The Second Vice Minister said that Korea’s ODA budget was increased to 4 trillion for this year and that, in particular, climate finance policies are being implemented through the GCF and GGGI.

□ Meanwhile, the Korea Forest Service announced that it would expand the scale of support of GFFP from the initial pledge of 60 million dollars to 100 millions dollars after the XV World Forestry Congress.

o To meet this end, it plans to develop new ODA projects for forest conservation and forest restoration worldwide, as well as to expand previous projects qualitatively and quantitatively.

□ Minister Choi Byeong-am of the Korea Forest Service said, ‘I hope that the ‘Ministerial Forum on Forest Finance’ of the XV World Forestry Congress will serve as an opportunity to reaffirm and put into action the will to achieve various forest-related targets that have been discussed.‘ The Minister added, ‘I hope that the effort to pursue and reflect the will in financial policies will be supported by each country.’