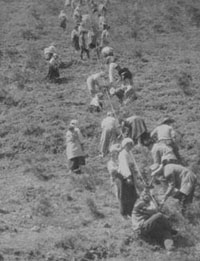 In the 1950s, forests were left in a state of extreme devastation as the result of excess cutting during and after the Japanese colonization and the Korean War. The growing stock volume per hectare then was merely 6㎥, 6% of the current figure. To restore these devastated forests causing serious social problems like lack of fuel, severe floods and droughts, the National Forest Plan was established.

After the legal and institutional preparations in the 1960s, the Forest Rehabilitation Project was finally launched in 1973. The government declared the Nationwide Tree Planting period (3.21~4.20) and Arbor Day to draw out active participation from the public. More than one million ha of denuded forest were restored with fast growing tree species through public participation. The 10-year project was completed 4 years in advance of its target.