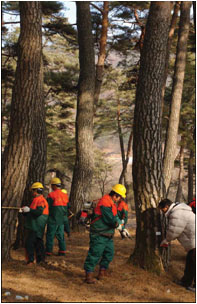 Approximately 3,800 species of forest insect pests and diseases are identified in Korea, of which about 20 species cause direct damages to trees. Of these, pine wood nematode, pine needle gallmidge, black pine bast scale and Korean oak wilt are under integrated management of the KFS. In 2005, the outbreak of pine wood nematode, which was first detected in Busan in 1998, damaged 566,000 trees nationwide. The Special Act on the Extermination of Pine Wilt Diseases was enacted in 2005 to prevent further damage and as a result, the number of affected trees decreased to 16,000 in 2010.