We had been walking for two days on a four day hike along South Korea’s Ddang Ggut Ji-maek ridge on the most southern part of its mainland. The walk had taken us through some spectacular terrain even if our first day had been blotted out by thick mountain fog in Wolchulsan National Park, but the atmosphere of ridge walking along spiky granite ridges with my American client James Daniel had still been good.

Now we were in good weather with blue skies near the small village township of Doam-myeon. The highlight thus far on this ridge had been its highest point, a peak named Deokryeong-san. The walk there was arduous as any mountain in Korea is. We had ascended from the road side up the crusty spine of the ridge that offered excellent panoramic views. 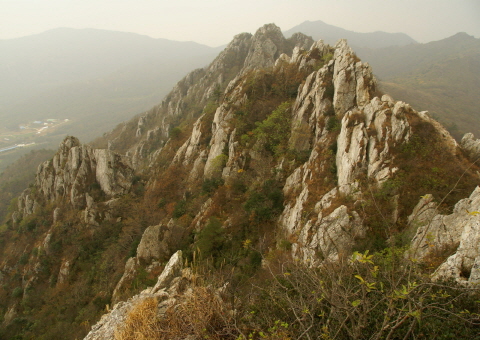 As it was early November the temperatures were mild and allowed us to move freely without the normal inhibitions that might come with the hot summer months. Most of the surrounding forest had dulled off into hues of ashen green. However the chest high grasslands that fill the saddle areas of this particular ridge area in Korea were a golden brown and their puffy ferns swayed in the fresh air giving the mountain ridge a new sensation.

We had walked already twelve or so kilometers and were starting to tire. I had arranged to stay at a nearby Korea Forest Service recreation village called Jujak-san. It was named after the mountain of which it sat under. I had never been there before but knew that the accommodations at these places are normally exceptional. James had no idea on what type of accommodations lay ahead, and telling him that we were going to be sleeping in a forest cabin probably gave him visions of a rustic log cabin with fireplace and shelves full of dusty old cans of baked beans…not that there was anything wrong with this. 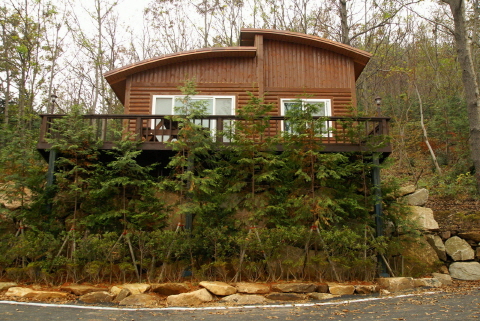 Once the ridge flattened out we met a trail junction with a sign pointing down towards the Jujak-san recreation village. The day was nearing an end and we descended down the trail in controlled anticipation. Sometime later after following the signs we broke out of the late autumn forest into the recreation village. Some rather luxury looking cabins appeared in front of us. It was mid week and there was no one about so we wandered a little further looking for the office. On finding the office I introduced ourselves and the staff warmly welcomed us in expectation.

They then drove us back to where we had left the forest and showed us our cabins. From the outside the cabins were that familiar look of timber stained weather boards with modern glass framed windows. There were as usual small verandahs which must have been a pleasure to use during the warmer months. I was pleased to know that they had given us a cabin each which I thought was mighty generous of them. The manager opened one of the cabins and led us inside. I admit to being a little shocked at what I saw. Most forest service cabins that I have stayed in are always in excellent condition, clean and modern, but this one was even more luxurious. The large one room cabin with attached kitchenette and separate shower, toilet, had a huge King sized double bed with large plasma TV monitor on the opposite wall. The floor was shining bright and the large French windows had saffron colored drapes. The whole scene lured a warm light into the interior. It looked very cozy and warm.

I turned to look at James, whom had sometimes struggled to sleep on the traditional, normally over-heated, ondul (floor) style accommodations we had been sleeping in on previous nights, and said to him, "this looks like your room, does it look okay to you?"


James didn’t even bother to comment, his tired eyes were still bulging wide open and his jaw hung lazily, too shocked and exhausted to explain the glee waiting to burst out. After showing us how the hot water system worked, I went to my cabin which was as equally luxurious, and stood in the piping hot shower for a good while. That night I cooked a simple dinner of noodles and spam just to downplay our status a bit.

After a good night’s sleep we had time to check out the local area a little. There was a small hermitage down the road under the mountain called Cheonhang-sa Temple. 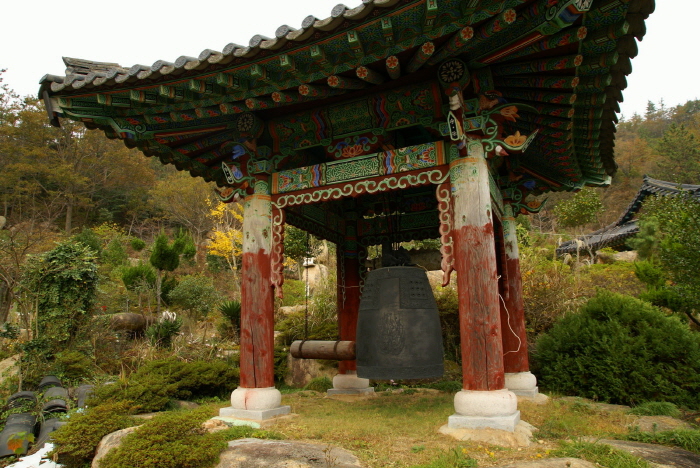 We paid a visit and discovered a charming garden like environment that held a strong identity towards a cave grotto and the mountain spirit (San Shin) shrine. The hosts were most kind to us feeding us fruit and coffee. After that it was time to leave and as we drove out to our next start point I saw the nearby Jujak-san Mountain and noticed how spectacular it looked and how much pleasure with options the surrounding area of this forest service cabin facility must bring to its visitors.

If you’re looking to visit an unvisited quiet part of South Korea in the southern area of the peninsula, then Jujak-san would be a good place to bring a special friend or your young family. Its pristine placement in deep wooded forest under granite mountain next to a small hermitage and rustic farming community is definitely the faraway break you need in luxury accommodation.