A MOU on Forest Recreation and Eco-tourism was signed in October 2013 in the presence of the Presidents of both countries on the occasion of the state visit in commemoration of 40-year diplomatic relation between Korea and Indonesia. In follow-up, a basic plan for establishing a forest recreation and eco-tourism center and conducting a capacity-building program (2015~2018) was developed. Now one project to construct a forest recreation and ecotourism site in Tunak center is being conducted in cooperation with the National Forestry Cooperatives Federation of Korea and PT. Yucom Jaya Mandiri of Indonesia.

The Pilot Project for Forest Management Unit (FMU) and REDD+ has been implemented in Kampar, Sumatra with the aim of organizing and operating FMU and securing forest carbon credits, since the ROD for this project was established in January and the project management team was organized in July, 2012.

To facilitate an effective implementation of this project, the Joint Steering Committee gathered three times and the REDD+ High Level Dialogue was arranged in August 2015. 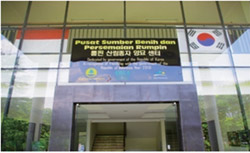 The project for creating Rumpin Nursery Center was conducted as Korea International Cooperation Agency (KOICA) project for 2005~2010. Under this project, Rumpin Nursery Center was established with seed management and tissue culture facilities in Java and an experimental forest was created on 320 ha in Kalimantan. For the continued management of this Center, the Ministry of Forestry of Indonesia and the Korea-Indonesia Forest Cooperation Center signed the ROD in 2011.

With the aim of enhancing a green cooperation which can symbolize Korea- Indonesia Forest Partnership, the Green Partnership Model Forest was established on 640 ha in Sentul, Hambalang provided by Indonesian Ministry of Forest. including facilities for eco-education, eco-tourism, agroforestry and resting areas.

During the first phase of this forest project (2011~2012), the master plan was developed by Seoul National University Educational-Industrial Cooperation and an eco-experimental forest was established. Hambalang Eco-edu Model Forest was created along with a 5 km-long trekking and jogging trail. This Forest was open in 2013 during the second phase slated for 2013~2021. The information center was created, open to the public and a multipurpose building was constructed for lecture rooms, dormitory and laboratories in 2013. The management and operation of this Sentul Forest will be handed over to the Ministry of Forest from 2021 for the coming third phase.