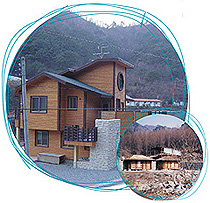 It is harmonized with a lake, mountains, and valleys. It borders with the truce line at the northern end of Gangwon-do.
Originally it was in the district of Gandong-myeon, Hwacheon-gun. Located on the east side of Hwacheon-eup, it was called Dongchon-ri (east village). But when the administrative districts were reorganized in 1914, it was called Dongcheon, merged with a part of Taesan-ri. After the Hwacheon reservoir was dammed up, the transportation to Gandong-myeon has become inconvenient. So it moved to Hwacheon-eup and has been merged with Taesan-ri.

How to get there