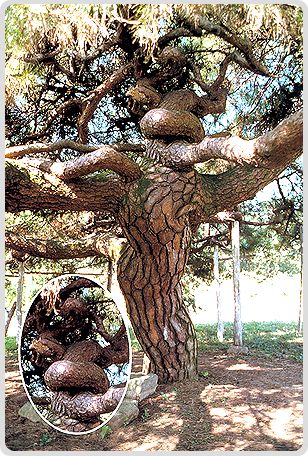 Ballyongsong (Baemsol) in Baeksadorip-ri is growing in Eosan Village, Dorib-ri about 1.7km away to the west from the myeon office of Baeksa-myeon, Icheon. It is called Ballyongsong because it looks like a dragon coiling on the ground before flying to the sky. Also it is called Mannyeonsong (10,000 years old Pine Tree) as it is Yongsong (Dragon Pine Tree) which lives over 10,000. It is estimated to be about 850 years old and 4.25m in height and 1.83m in girth. It spread widely by dividing into all directions at 2m high from the ground, and branches toward the sky is bent by 180 degrees twisting oddly as belching.

It is said that at the end of the Shilla dynasty a Buddhist priest Doseon planted this tree while he was predicting that a great man would be born in the future here in Hamheumg, Seoul, Gangwon-do and Gyeryongsan (Mt.). And also, a person who peeled the bark of the tree is said to have died of a disease.

As Ballyongsong (Baemsol) in Baeksadorip-ri is very old, has very unique figure and is very valuable for biological study, it is designated and protected as a Natural Monument.