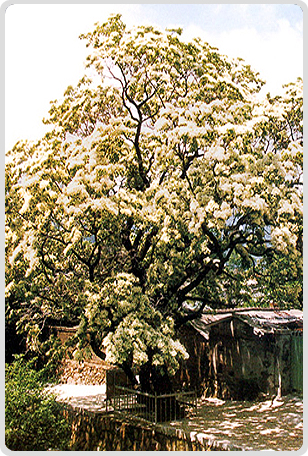 It is called Ipap tree because when flowers of Chionanthus retusa bloom, the whole tree covered with white flowers looks like steamed rice. Or, also it was called Iphamok (Tree) which means that flowers of a tree bloom at the onset of summer and then changed into current name.

The Ipap tree in Jungsan-ri Gochang is estimated to be about 250 years old and 10.5m in height and 2.68m in girth. It grows in the low district in front of the village alone, and while it still keeps its natural figure of which branches spread fairly, its physical condition is not good by fumes of vehicles, etc. It is one of the smallest Ipap trees which have been designated as Natural Monuments.

Most of the big old Ipap trees in Korea are said to predict whether the year's rice crop will be rich or poor with the amount of flowers on a tree. Since Ipap trees grow well in a place with plenty of water, if there is proper rainfall, they bloom flowers in full or if they are short of rainfall, they cannot. And also rainfall is closely related to rice farming. Therefore the story originates from the result of observation of nature throughout long years of experiences.