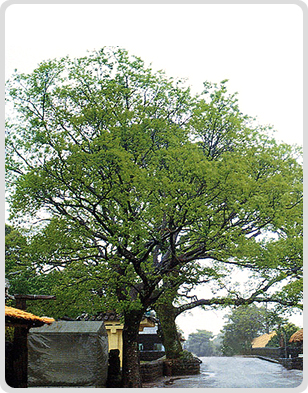 A zelkova inhabits in a temperate climate region such as Japan, Taiwan and China as well as Korea. It has a round shape with branches widely growing to all directions. Its flowers bloom in May and its disk-shaped fruit ripe in October. It has been used serve a shady resting place in the village because of its old age and thick branches like and protected as a Dangsan tree (the tree of guardian) which protects and defends a village. Hackberry inhabits in Korea, Japan and China. It grows big, and was planted as a windbreak forest to protect from wind or as an assistant forest to help a place with low energy in a village according to Feng-shui (a theory of divination based on topography) since time immemorial..

The whole Seongeub-ri near the southeast coast of Jeju-do is designated as a Major Folk Material No.188 and there are one zelkova and seven hackberries around Ilgwanheon in this village. The Zelkova is estimated to be about 1,000 years old and 30m in height and 5m in girth. Six hackberries are 24∼31m in height and 2.4∼4m in girth. There is a natural forest with five Japanese camphors, Japanese cornal trees (viburnum awabuki), silver magnolias and camellia trees around. As the forest protects this village from wind by surrounding it, the village inhabitants make the forest sacred. According to records, it is said that there were also trees here during the reign of King Chungnyeol (1274~1308) but only a part of them seems to have survived so far.