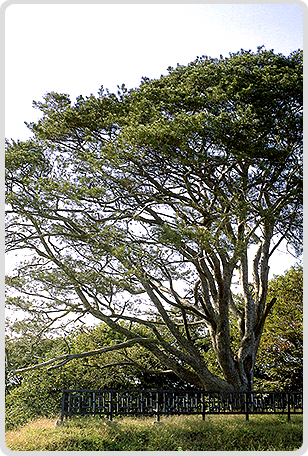 As a white pine tree turns to white by getting stripped the bark of the tree, it is called Beaksong (White Pine) or Baekgolsong (White Bone Pine Tree). The tree is native to China and brought by envoys to the Joseon dynasty from China.

The white pine tree in Songpo is estimated to be about 230 years old and 11.5m in height and 2.39m in girth. From the side it has an inverted triangular shape like the ribs of a fan spreading up and its bark is less white than others'. There are two opinions regarding the origin of this tree. One is that Yu Hagyeom got two white pine trees from Chinese delegate during the reign of Seonjo (King, 1567~1608) in the Joseon dynasty and gave one of them to an ancestor of Choi Sanggyu (the owner of the white pine tree in Songpo) so he planted it around a graveyard, and finally it has grown big. The other is when Kim Jongseo reclaimed six military camps during the reign of Sejong (King, 1418∼1450) in the Joseon dynasty, General Choi Suwon who was on duty there brought and planted it on his way home. As it was from China, it was also called Dangsong (Pinr of Tang in China) by inhabitants for quite some time.