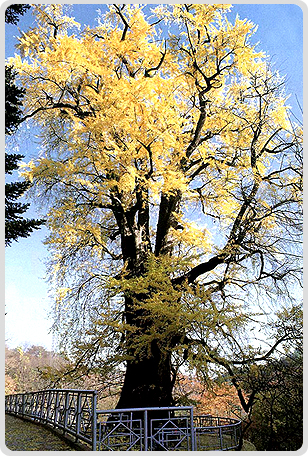 Even considered as living fossils, ginkgoes are old trees that inhabit in Korea, Japan and China. It is said that those were brought into the country together with Confucianism and Buddhism when they were introduced from China. Their fall foliage is very beautiful and they are not damaged by blight and harmful insects and provide wide and thick shade, they are often planted to serve as arbors or roadside trees.

Ginkgo in Youngmunsa (Temple) is estimated to be about 1,100 years old and 67m in height and 15.2m in girth. It has the record as the oldest and the highest among ginkgoes in Korea and a lump under a branch is a characteristic of the tree.

There are two major legends regarding the tree. One is that the Crown Prince Maui who was a son of King Gyeongsun (A.D 927~935) in the United Shilla dynasty planted it on his way to Geumgangsan (Mt.) with sorrow of losing his country. The other is that a Great Buddhist Priest Uisang put his stick on the ground and it was changed into the tree. Besides, several stories have been transmitted; just touching a saw to cut it made it bleed, or, when Japanese troops set fire on Youngmunsa (Temple) during theresistance of Jeongmi loyal army, only this tree was not burnt, or, whenever major events happened, it let people know those producing sound.