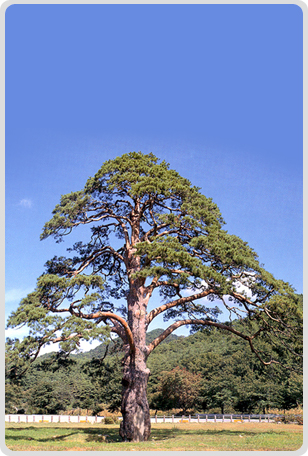 Jeongipum Pine Tree which stands in the middle of the street for Beopjusa (Temple) in Songrisan (Mt.) is estimated to be about 600 years old and 14.5m in height and 4.77m in girth.

There is a following story on how this tree got its name, Jeongipum Pine Tree. When a sedan chair which Sejo (King) rode passed under the tree while he visiting Beabjusa (Mt.) in 10th year (1464) of Sejo (King), it was entangled with a hanging branch. Thereupon he said "A sedan chair is entangled" and the tree raised its hanging branch itself right away and let the king pass it safely. Or, Sejo (King) avoided rain under this tree while passing by. Thus Sejo (King) awarded it official rank of Jeongipum (ministerial level at present) to praise its loyalty. So it has been called Jeongipum Pine Tree.

As it is very valuable for biological and hereditary material as a beautiful big old tree and for cultural material as legends which tell the lifestyle of serving kings at that time, it is designated and protected as a Natural Monument.